The Hawthorne Works at Cicero Illinois was an enormous factory built by Western Electric in 1905. In 1924 their electrical suppliers claimed that better lighting would increase productivity and the managers at Hawthorne commissioned a study to find out whether this was true.

They fixated on their factory production workers in charge of assembling electrical relays which were switching devices used in telephone exchanges.  So, the researchers moved in, measured productivity, divided the workforce into a test group and a control group, and then carefully increased the light levels for the test group.  To the surprise of the researchers, productivity shot up in both groups.   Intrigued, the investigators tried changing their study by changing the work environment in other various ways.

One of the tests involved two women that they invited into the test room.  Here, an experimenter discussed changes with them, and at times implemented their suggestions.  One of the recommended changes was to have two five minute breaks at 10AM and 2PM.  When the experimenters later found that productivity had gone up, they offered ten-minute breaks instead (after hearing mumblings that the breaks were nice, but a little too short).  With the longer breaks, they found that their overall productivity went up by an astonishing 30%.

This psychology study has gone on to be the framework for several other studies (none of which we have time for today).  All of the experiments have led to many new behavioral psychology conclusions.  Let’s dive into two of these conclusions from the Hawthorne Effect that should impact the way we still serve our teams today. 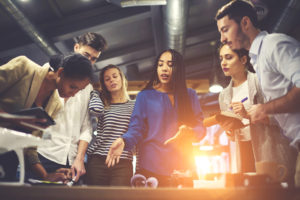 So, perhaps this psychological research indicated that the workers wanted to please the experimenters, which is often the case in psychology studies.

Or… Maybe it is possible that people really do support a world they help create.