So it has been said, there have been many unique track meets that the spectators could never forget. This particular meet in 1977 was especially unforgettable.

The 100-yard dash showcased a world-class field with most of the fastest runners since the 1976 Olympics, held the year earlier. On this special day, the sprint event was the 100-yard dash, as opposed to the standard 100-meter format. Among the sprinters was Ivory Crockett. He was a crowd favorite because of his typical energy and enthusiasm. But this day was different, he seemed all business.

Before the race he was reading a small piece of paper. He looked it over several times because he stared at it for what seemed like ten minutes. Then he folded the paper and delicately put it in his shoe. He tied his shoes and finished warming-up for the race like the rest of the athletes.

And then it happened. The 100-yard dash was over in a flash. The eight gazelle-like men came to the line, got set, and looked like bullets shot from the starter’s gun. The fans went crazy as Ivory Crockett finished first in a wind-aided 8.9 seconds. That was the fastest 100-yard dash ever recorded. 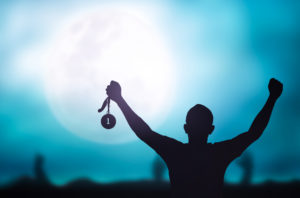 He was euphoric! As he ran a victory lap the onlookers applauded with amazement. They just witnessed something that had never been done before. History was being made before their eyes.

When things settled down and the media was able to get close enough to interview him. Ivory Crockett answered several inquiries about how he trained, and what he’s eaten.

Finally, someone asked THE question. “What was on that piece of paper you read before the race?” Ivory bent down and took off his shoe. He still had the paper with him. He delicately unfolded it and read it aloud to those gathered. It simply said: 8.9!

So that’s the story (so we’ve heard). Here’s our simple question in response: